A downloadable Board Game

Any remaining dogs place in the Pound face up. The Pound is a row of dog cards off to the side.
Begin Drafting. Or, for a quick start, play with the starting dog cards dealt.

=DRAFTING=
Each player selects 1 dog from their hand and puts face down in front of them, then passes the remaining dogs to the player on their left.

When all players have drafted cards this way, players pick up the dogs they put face down. These dog cards become their hand for the game.

=PLAY=
1. If P, A, W and S medals are all on their letters, move the medal back off each letter. All 4 medals are now available.

2. All players select a dog from their hand and place face down. They can play either face down in an empty space in front of them (a new dog), or add it face down on top of their previous contestant, if one exists. This is called breeding.

3. All players reveal their dogs. If they bred their new dog with their previous contestant, combine the stats of the two dogs for awarding medals.

4.1: Evaluate the medal assignment first, THEN do Phase 5. A winner can still tie with a later medal and prevent it from being won. For example: a Bulldog might win the A medal. An AC Spaniel also in play would not win the W medal because the Bulldog tied. If the AC Spaniel was a new contestant, then it will have the opportunity to win the A medal the next round.

7. If there are 4 or more dog cards in the pound, Rescue phase begins then Play resumes.

=WINNING=
First player to get 3 Champion dogs wins! If more than 1 player an equal amount of Champions then continue playing until one player takes the lead. 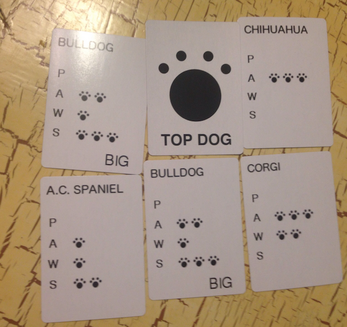